"Amateur radio diplomas" are certificates, which certify that one has made a certain number of radio calls under prescribed conditions. The diplomas are issued by the various radio amateur organisations. The requirements are very different. They range from confirming radio communications with a given city to proving radio communications with 100 countries around the world. The creation of diplomas is intended to increase the activity of radio amateurs. The aim here is to motivate those who want to have their successes confirmed in writing and want this document as an attractive decoration for their "radio shack".

This is how Hans-Joachim Pietsch, DJ6HP, defined the term in his Amateur Radio Lexicon [1] published by Franzis-Verlag in 1981. 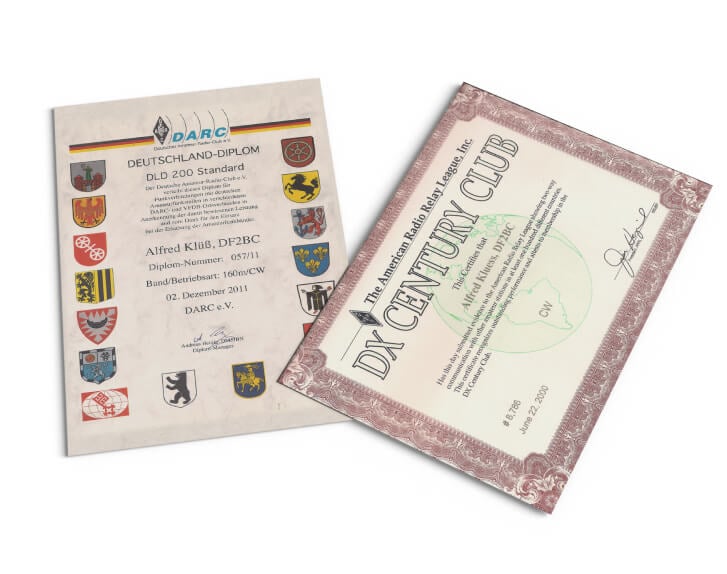 The fascination of diplomas

What characterises the enthusiasm for collecting diplomas? Those who are fixated on actual radio operation and are QRV a lot are often also enthusiastic about amateur radio diplomas. Those who are hobbyists, who constantly have the soldering iron in their hands and see the few QSOs they have time for as confirmation of the functionality of their self-built equipment, are rather rarely to be found on the side of diploma hunters. In times when the conventional QSL card printed on paper seems outdated to many, diplomas are still a possibility to visualise a proof of one's achievements and hang it nicely framed on the wall. Countless radio shacks, where diploma after diploma line the walls, bear witness to this enthusiasm.

The Deutschland-Diplom DLD is issued by the Deutscher Amateur Radio Club e. V. (German Amateur Radio Club). The application requires proof of a certain number of two-way connections with stations from different local clubs of the DARC or the VFDB. The local associations are identified by their so-called District and Local Association Identifier (DOK) and count only once each. The DLD is issued separately in increments of hundreds from DLD 100 to DLD 1000 for all amateur radio bands, mixed either for all modes or for a single mode. 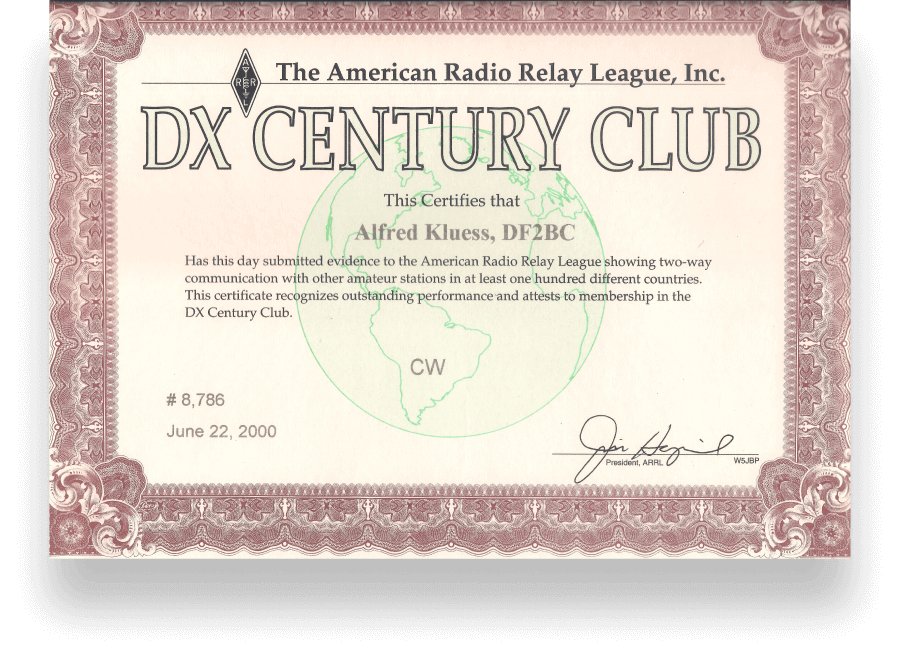 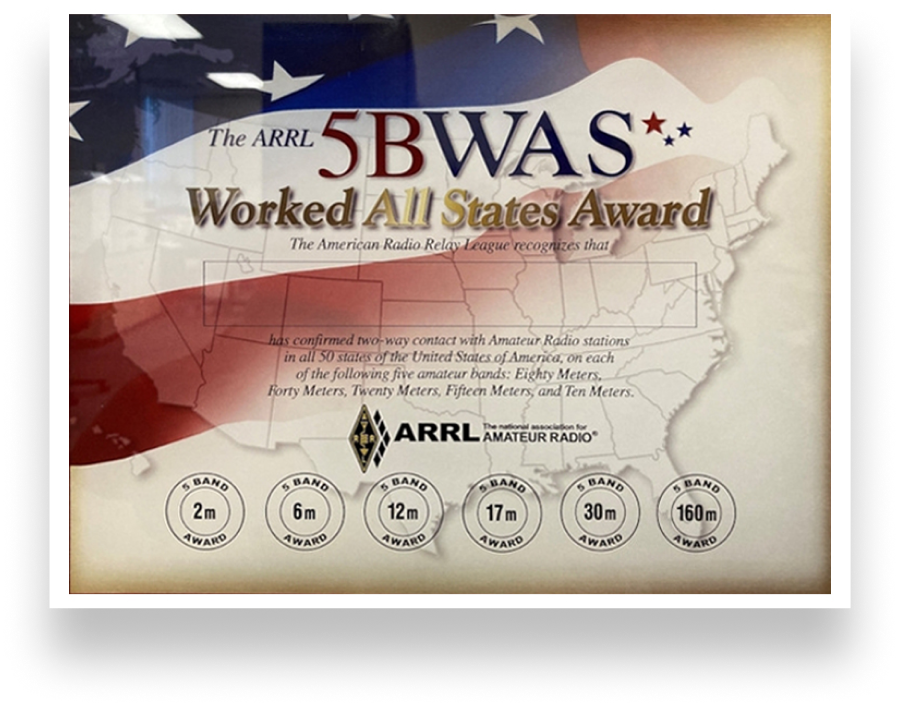 If you have confirmed all 50 US states, you can apply for the WAS at the ARRL. While you can collect connections to the states on the East Coast quickly, some sparsely populated areas in the Midwest and on the West Coast require a little more patience, at least from Europe. A prominent example is Alaska KL7. The WAS also exists divided for bands and modes, in different versions. Publisher's info and application: 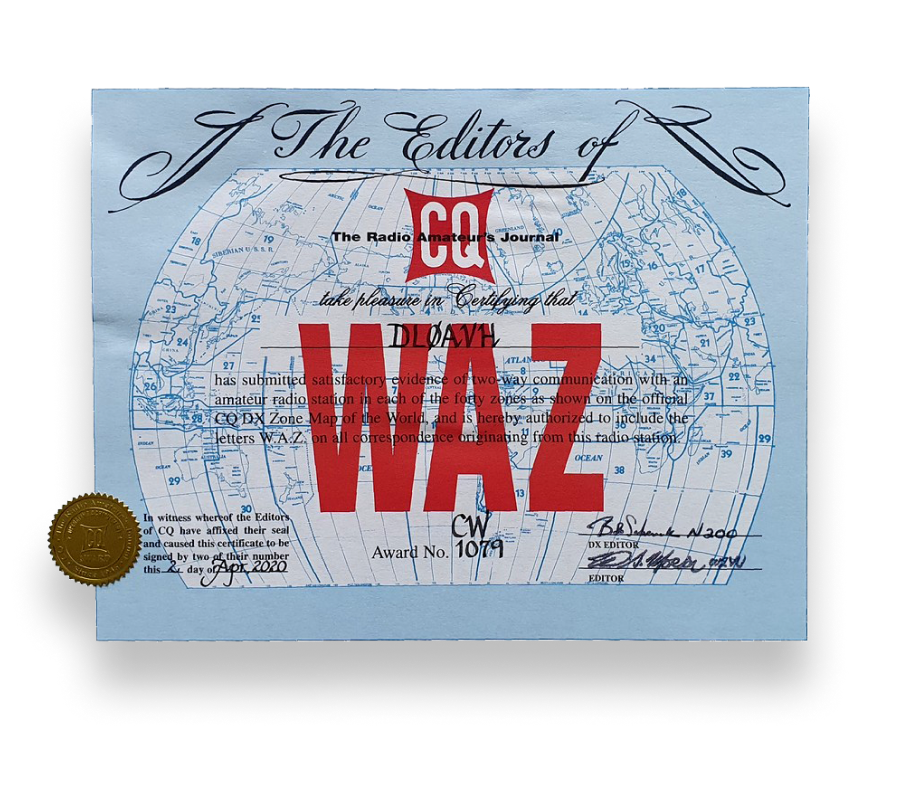 The earth's surface is divided into 40 CQ zones on the initiative of the American magazine CQ Amateur Radio, in order to have a criterion for contests and diplomas. Germany, for example, is in zone 14. Anyone who has confirmed a QSO from each of the 40 zones is a candidate for the WAZ diploma. Application conditions and application forms in PDF format on: 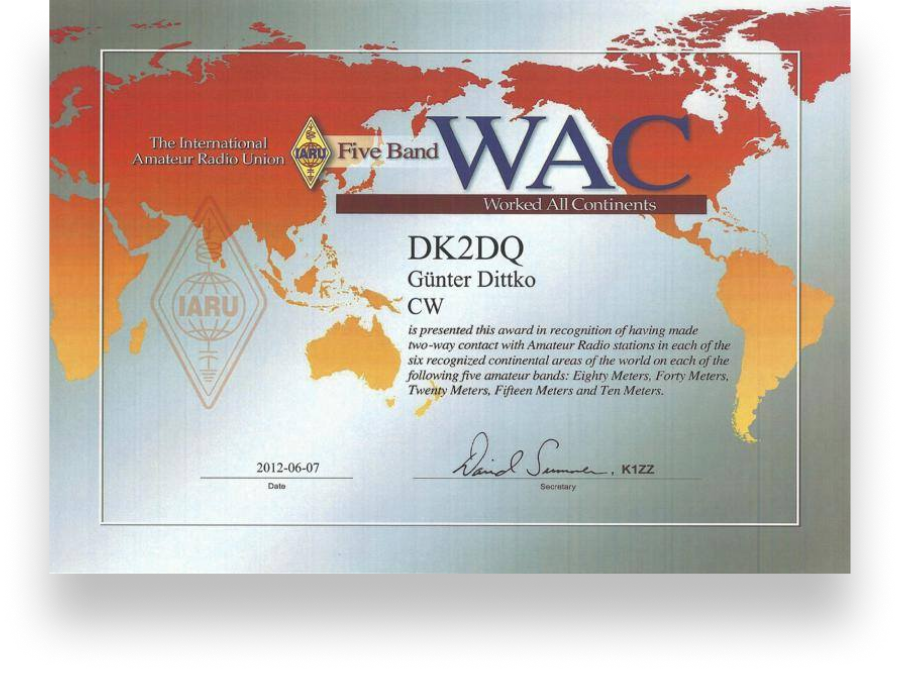 The WAC Worked All Continents requires QSL cards from the six continental regions of North America, South America, Africa, Asia, Oceania and Europe. In terms of operating modes, transmitting power and bands, the diploma is awarded in different versions from the single-band version to the 5-band diploma. The IARU International Amateur Radio Union publishes the diploma. As a member organisation of the IARU, the DARC is responsible for WAC applications from DL. Information on the diploma announcement and application are available on the DARC website at: 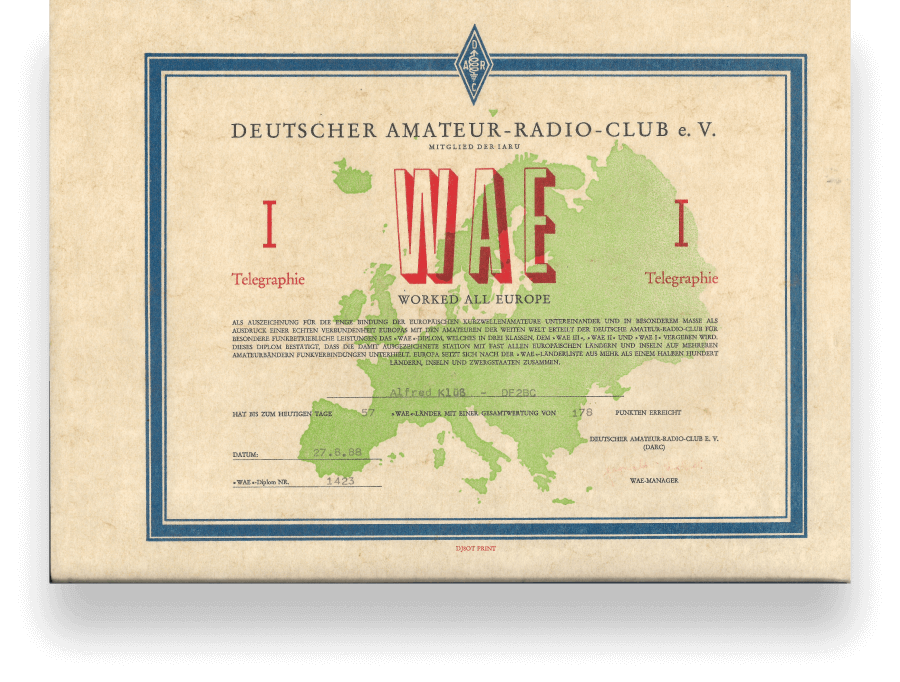 The five-part diploma series Worked All Europe, WAE III, II, I and WAE TOP and WAE Trophy, published by DARC e. V., is based on the WAE country list. The number of points required in each case consists of the number of countries and a maximum of five band points (number of bands on which the country is confirmed). The European countries for the basic diploma class III and for advancement to class II can be obtained relatively quickly. At the latest, the path to WAE I becomes rockier, because stations from the missing countries and some islands are rare, there isn’t much activity from some places. This is even more true for WAE TOP and Trophy. All diplomas and awards are either mode-bound, each for CW, SSB, RTTY, FT8 and other digital modes, or issued as mixed-mode version. 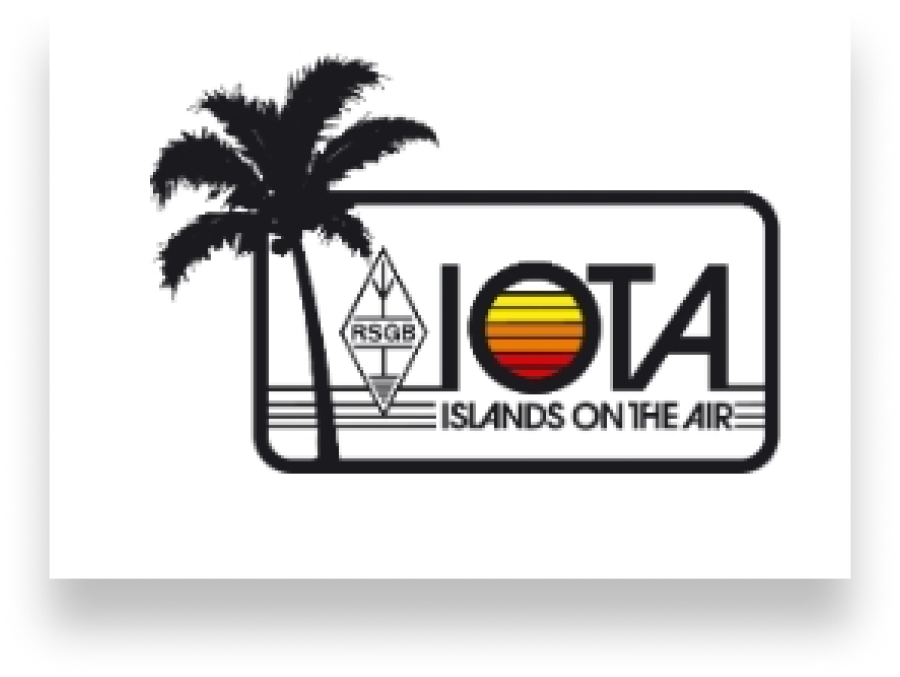 The IOTA “Islands On The Air” aims to promote worldwide island radio operation. As early as 1964, the British shortwave listener Geoff Watts in cooperation with the DX-News-Sheets magazine launched this initiative. In 1985, the Radio Society of Great Britain (RSGB) took over the management and organisation of the IOTA events. Since then, IOTA has enjoyed a steadily increasing appeal among radio amateurs. In an island list, the RSGB defined the valid islands and assigned them a consecutive IOTA number. Worldwide, 21 diplomas are currently offered in the IOTA programme. Especially the annual IOTA contest in July offers the opportunity to reach many islands and collect points for one of the IOTA diplomas.

Besides the diplomas, for which radio connections on many different bands and mixed modes of operation count, there are also exclusive diplomas for certain frequency ranges or individual bands in the shortwave or VHF range, as well as for only one, special mode of operation. Besides ATV, SSTV and FT8 and other new digital modes, there are still enthusiasts, rounds, contests and diplomas even for the time-honoured RTTY, which is still widely used, at least in contests. All these diplomas are designated as exclusive diplomas from the outset in their announcement and presentation, i.e. the target group and the exclusive goal to be achieved is already clear from the printed text of the diploma.

This is in contrast to the diplomas which, although primarily advertised for all bands and operating modes, can also be applied for as a single-band version or for a single operating mode (such as DLD, DXCC or WAE), In the case of the latter, a certain exclusivity is only documented by an entry. 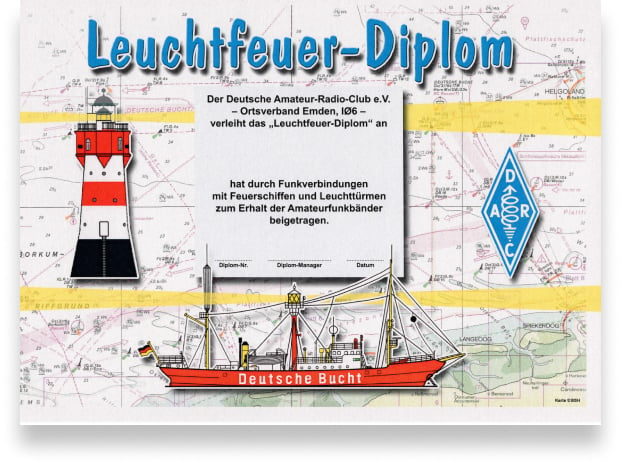 What is the challenge in this?

As the level of difficulty increases, so does the recognition for a diploma achieved. That's why you shouldn't necessarily take every diploma that your QSL card stock offers, but set yourself specific and attractive diplomas as a goal from the beginning. This brings us back to the classics already presented.

You can work towards this goal in order to fulfil the application requirements in the shortest possible time. Or you can simply let the collection of QSLs for the diplomas run alongside. You should keep track of what has already been worked on or confirmed and which countries or points are still missing. In the past, paper cards were used for this, today one of the many logbook programmes does a much better job. The customs of sending QSL cards play an important role in the diploma work, because with the dispatch via QSL office it becomes more difficult the farther up you go. The only way to get QSL cards from rare countries and DXpeditions in a timely manner is to send them directly by post, enclosing a self-addressed envelope and dollars for the return postage.

What is a Trophy?

A trophy to an amateur radio diploma is, comparable to a trophy or a cup, an additional and sensibly the last and highest award to a diploma, which is issued in several difficulty levels.

What is a sticker?

What is the DIG?

The Diploma Interest Group DIG has set itself the goal of promoting and adhering to regulations for the official recognition of new diploma tenders in order to promote activity on the bands through good diplomas. Members are encouraged to operate well and fast in the spirit of the so-called HAM-Spirit. Information on new diploma releases is disseminated in regular DIG newsletters and in the weekly DIG round-up on the 80 m band. Since its foundation in 1969, the DIG has had a large number of members. As of 2009, the interest group had about 6300 members. Of course, the DIG also issues a number of its own DIG diplomas.

Where should you start as a beginner?

The large number of regional and worldwide diplomas is confusing for the beginner. One can start with a few local diplomas, the conditions for which can usually be fulfilled relatively quickly and easily. If one is aware of the longer-term commitment for one of the more prominent diplomas, there is nothing to stop one from setting a worthwhile goal right away with the DLD, DXCC or the other classical diplomas.

What equipment is needed to successfully achieve diplomas?

In principle, no special equipment is required - but above all a lot of patience. Of course, good equipment for the station is helpful. Aboveall, a (directional) antenna is an advantage. Only then could a higher transmitting power be considered. Of course, if you want to reach the Honor Roll (DXCC's list of honour) with well over 300 countries, you will certainly have to use high power amplifiers. However, the basic DXCC diploma can also be achieved with 100 W transmitting power and single-band dipoles, in telegraphy or FT8 at all. The best equipment is of little use if one does not have a feeling for the propagation conditions and does not proceed strategically in the increasingly difficult hunt for DXCC points above the basic diploma with the aid of propagation forecasts, announcements of DXpeditions, the DX cluster and so on. 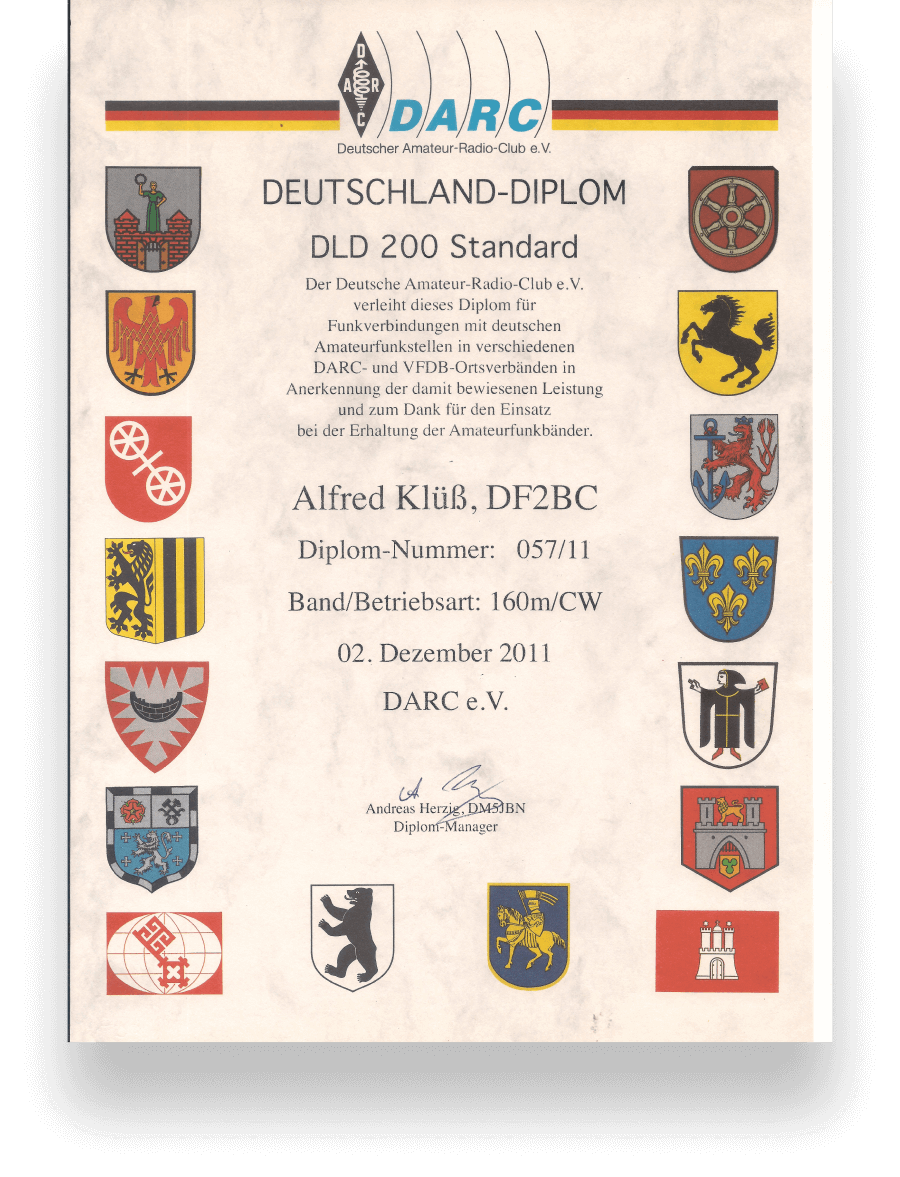