The Japanese company Diamond is known for its mobile antennas. However, there is much more to it - namely mounting options, cables and much more. We present this comprehensive and coherent concept here.

How do I attach an antenna to the car?

To understand the Diamond antenna system, we need to briefly look at the possible mounting methods for mobile antennas. There are essentially five methods:

1.
Window clamp antennas
Here, a special base is placed on the lowered window, then the window is cranked up and then clamped in place. Apart from the fact that such models hardly exist anymore, they are also difficult to use on modern cars with motor-driven and thick window panes.
2.
Mounting bases
This is certainly electrically the best method, but who likes to drill a 16mm hole in the bodywork of the car? On leased cars it's simply not allowed, and on many modern cars it's also a mechanical problem, for example because you can't remove the headlining.
3.
Magnetic bases
There is a large selection here - complete antennas with magnetic bases, or individual magnetic bases to which you can select a matching antenna. A nice solution, but not without problems: Fixed cable length, does not hold at very high speeds and the paintwork is also quickly scratched if you are not very careful.
4.
Adhesive glass antennas
This solution uses plates that are glued to the inside and outside of the window pane, for example at the back or side. The coupling is capacitive. The advantage is that the cable is already in the interior. However, there may be problems with the window - either heating wires interfere, or the pane is so heavily tinted that the capacitive coupling fails.
5.
Clamps for the roof rails and the tailgate
Here, special mounting clamps are placed either on an existing roof railing or on the side of the tailgate. We will talk about exactly this system in more detail here, a little further down. But first we need to clarify where the antenna should go.

Where to put the antenna - roof or boot?

With hatchbacks like a VW Golf there is hardly any choice: here the antenna can only go on the roof. This is also the best position for radio emission. In addition, the antenna can be permanently mounted here - it only has to be unscrewed when driving to the car wash.

The Diamond adhesive and clamp bases discussed here are equally suitable for roof or rear mounting. Some models are also suitable for heavier antennas, such as those needed for shortwave.

The classic mounting location for racks and antennas. However, it is becoming increasingly rare to find. The Diamond K-300 antenna mount can be mounted here. 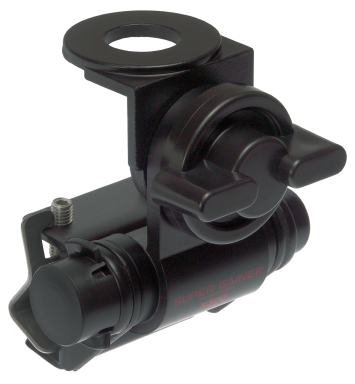 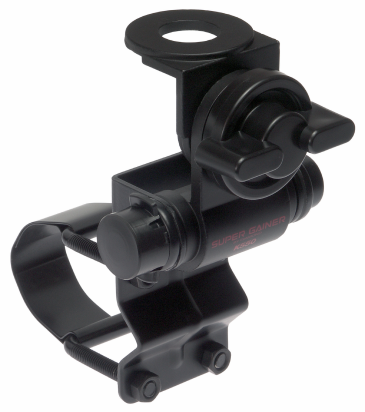 Modern cars often have roof rails on which a luggage rack or roof box can be securely and stably mounted. This is then of course also a good, safe and stable place to mount an antenna bracket. The Diamond K-501, K-515 and K-550 are designed for this purpose, depending on the design of the roof rails.

The K-512 can also be screwed to a roof railing, but also to round struts, pipes, balcony railings etc., the K-540 besides the roof railing also for example to truck mirrors.

To the products
Tailgate

The Diamond antenna mounts K-400, K-401 and K-402 can be mounted on the top or bottom centre of the boot lid of a classic sedan with boot, but also on the side, which makes them suitable for hatchbacks. 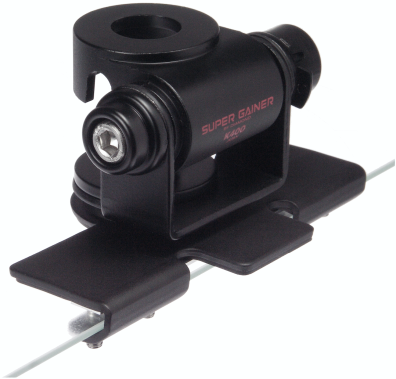 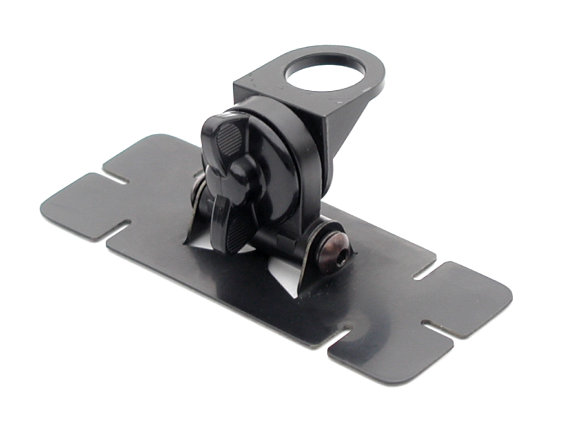 Gluing is also possible! The HRK holder can be tilted in two axes and thus always adapts to the situation - whether on the bodywork or the window pane. The mouldable plate holds very firmly and also supports longer antennas. And if necessary, the HRK mount can also be removed again.

How does the cable get into the interior?

This is where the Diamond antenna system starts to make sense. For all the above-mentioned bases and clamps there are exactly matching cables with different inserts, i.e. connections for the antenna. Since we don't want to drill a hole, the cable is fed through a door opening or the tailgate. It will be pinched, but protected by the thick sealing rubber, so it will not be damaged. 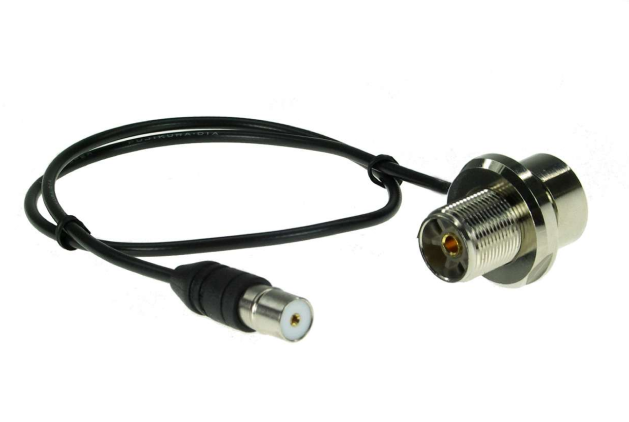 The thin "SLx" cable leads from the terminal through the tailgate (or door) into the interior. It is as short as possible to minimise attenuation. Here Diamond offers cables with N or PL sockets, as well as various relatively short lengths. The N or PL sockets are permanently mounted in the above mentioned clamps.

The thicker "DQx" cable is then connected internally to the thin SLx cable with a special, already mounted coaxial plug and leads to the radio. Longer lengths are available, again with different connectors so that you do not need an adapter to connect the radio. 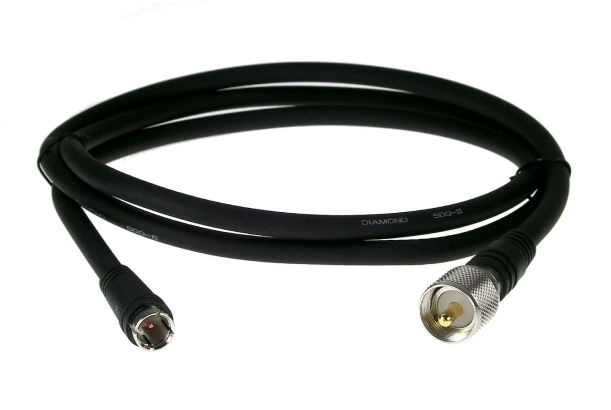 This way you have an exactly fitting cable with the best of both worlds: a cable that is as short and thin as possible on the outside, and a longer and thicker cable (with less attenuation) on the inside.

Since each side of the cable is available with freely selectable connectors, you can easily reuse existing antennas or choose the model that fits best in terms of type and length. On the outside (SLx cable), there is a choice of N-socket or PL-socket, each angled and fitting exactly into the Diamond clamps in terms of length. They are held in place by a strong nut. This way, the larger clamps can also support heavy and longer antennas. A cover cap is supplied which can be screwed onto the socket instead of the antenna in the car wash.

Various connections are also available for the thick DQx cable inside: N and PL, and even SMA plug and socket for various handheld radios. With a diameter of 7.5 mm, the cable is still manageable and can easily be hidden in corners in the vehicle.

Here you can choose freely from Diamond's huge range of antennas with PL or N connectors at the base. For VHF/UHF combination antennas, the lengths vary from 29 cm to 1.5 m - the shortest is thus also suitable for entering most garages when roof-mounted. Most longer antennas have an articulated joint, which saves dismantling for a garage entrance.

A few possible antenna models are presented here as examples. The complete selection from over 40 antennas can be found below in the WiMo webshop list.

One of the most popular short dual-band antennas is the AZ-504: suitable for the 2 m and 70 cm bands up to 50 W transmit power, at only 39 cm length. This means it is often suitable for garage use when mounted on the roof. On 2 m and 70 cm, somewhat less gain than longer models, rigid, minimalist, hardly noticeable. Alternatively, there is the AZ-504FX: identical data, but flexible and black.

The NR-770 is a popular choice when it needs to be a little longer. It is available in various designs, always about one metre long, black or glossy, with an open or closed coil. For particularly heavy use, for example on 4x4 all terrain vehicles, this antenna is also available with a spring at the bottom (NR-770HSP).

The robust and longer aerial for shortwave

The light and flexible aerial for shortwave

The multiband antenna for shortwave

Multi-band mobile antenna for 40, 15 and 10 m band as well as 6 m, 2 m and 70 cm, up to 200 W transmit power, 190 cm length, with articulated joint. Ideal for modern multiband radios with or without VHF. Of course, it can also be used on the balcony if there is no other space. Optionally, the resonator HVC-14CX is available, with which operation on 20 and 30 m instead of 40 m is possible.

Diamond - one company - many possibilities - your gain

The Diamond system offers a coherent concept from the mounting to the cable and a huge choice of antennas. This means that antennas can be mounted and operated easily and safely, even in complicated cases, even with rental vehicles.